As October wraps up and I purchase more boxes of candy to replace the boxes of candy I’ve already eaten, I turn my thoughts to Hallowe’en.  Apparently, the first reported use of “trick or treat” in Canada was somewhat awkwardly introduced by my hometown Lethbridge Herald, 4 November 1927:

Hallowe’en provided an opportunity for real strenuous fun. No real damage was done except to the temper of some who had to hunt for wagon wheels, gates, wagons, barrels, etc., much of which decorated the front street. The youthful tormentors were at back door and front demanding edible plunder by the word “trick or treat” to which the inmates gladly responded and sent the robbers away rejoicing.

I came of trick-or-treating age in the early 1970s. They were heady days before Pinterest, or Instragram could shame parent and child alike for hastily throwing a sheet over the kid’s head and calling it a night. Maybe you grew up in a home where the eye holes were hastily cut into the sheet before the sheet was thrown over your head, and not after. Me: AARRRGGHH! Dad: The blood makes it scarier!

Hallowe’en Pinterest has really upped the game, with its spider cupcakes or Jello™ hand-painted eyes or hat cookies.  The latter likely could be frozen and stored for American Thanksgiving celebrations as well.

How many hours does it take to clean strawberries, attach them to layered cookies (Oreos™), coat everything in chocolate and then decorate with green icing? Just look at the little hat buckle–it looks to me like someone had time to arrange 4 orange sprinkles into a perfect rectangle.  Seriously, the recipe calls for 32 orange-colored sprinkles to decorate the 8 cookies, and estimates 20 minutes prep time.  Dip me in doubtful.  Hours on Pin-terest, a minute on the lips.

Frankly, it isn’t even that I recall uninspired Hallowe-en treats at the parties. It wasn’t that we only had “pumpkin” ritz crackers covered in cheez-whiz with black licorice nib eyes or boiled hotdogs haphazardly carved to look like severed fingers. I don’t recall that we did Hallowe-en parties at all, save the traipse around the elementary school hallways.

I am really not complaining. I grew up firmly middle-class and my Hallowe’en grievances were not scarring.  But as for consumerism and creativity, it was far more Woolco™ than Michael’s™. We had plastic masks that carried a high risk of suffocation, the type that either got hot and sweaty about 8 seconds after donning, or had the dental-floss-gauge elastic break so it was undon-able about 3 houses down the street. (Who am I kidding? It was long before dental floss or floride, even.) 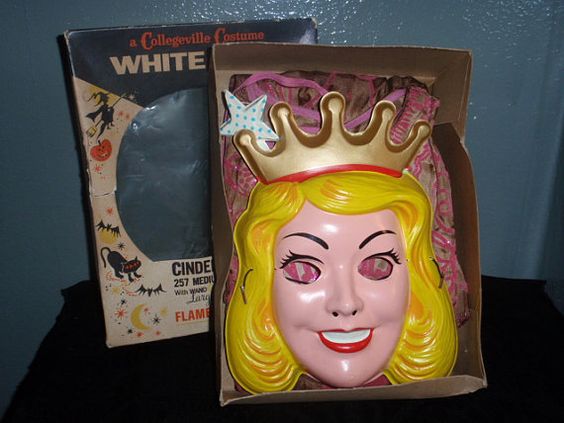 Shown here:  a now “vintage” mask that I recall wearing.  “White for Night,” Cinderella, “flame-retarded” with “large eye-holes.”  A store-bought costume was, however, a rarity:  polyestery, hospital-gown styling:  sleeves, flimsy tie at garotte-level and warnings more about melting than burning man incidents.

I was convinced that the only thing that could possibly give away my true identity was the fact that often at the end of October, before the globe warmed, it was freezing on the prairie, and we were required to put on parkas under the garb, completely ruining the illusion that I was, in fact, Cinderella.

One year, I was a clown.  Another year, I was a die: child-size box painted white with holes for head and arms, and black dots on all sides (except there was no bottom, duh).  Bad casting….get it? The next year, with a clever touch of paint, it was repurposed and I went as an ellipsis. I didn’t pause for a second to consider why dressing as a gypsy was not cool.

My neighbourhood was culturally and religiously diverse, so our eyes were opened to a wide variety of costumes. We could argue whether the white kids with Ukrainian surnames or the white kids with Scots lineage or the white Mormon kids wore the witch/ghost/zombie better. The UNICEF™ box was a big thing. There was a jerk neighbour who demanded a song in exchange for treats. An a-hole who gave out apples.  Perennially disaffected teenagers who dressed up in toques and carried pillowcases for loot bags. The fancy kids had plastic pumpkin pails. The rest of us had yet-to-be banned single use plastic bags. The chocolate bars were bigger then; no one cared about the kids with peanut allergies. It was safe as houses.

The current rage, I guess is to postpone trick-or-treating events  due to bad weather.  Or maybe should it be extended over two nights to…what?  relieve congestion?  Or fixed on the last Saturday of October? (see also:  Canadians weigh-in on offensive costumes).

A Judge in New Brunswick weighed in on Hallowe’en matters in 1991 (CanLII 2652 (NB QB)).  In Nackawic, New Brunswick, on October 31, 1990, it sounds like the entire police department (numbering 3-4 officers) arrested a Mr. Monteith, charging him with mischief for breaking a $3.00 cedar fence rail to add to a Hallowe’en bonfire.  The officers fingerprinted him and held him overnight.  The Provincial Court judge dismissed the charge.

The Court enters into the timeless debate (and I quote):  “Halloween: Suppress or Celebrate?”

the apparent police view (get him as hard as the law allows, end Halloween crime) and  the apparent defence view (lighten up, it was Halloween) are both reasonable points of view reflecting legitimate and opposite views of Halloween.

The Judge notes that the Criminal Code provides legal excuse for otherwise criminal activities such as those that occur on Hallowe’en, when children, aided and abetted by their parents, attempt to extort candy from the public under threat of mayhem.  The Court comments, however, “I am reluctant to take sides on whether Halloween should be suppressed or celebrated. Some day the Supreme Court of Canada may decide.”

The actual issue was whether the police had a right to fingerprint Monteith.  Mischief is a charge that can proceed as a less serious summary offence (no fingerprints, up to 6 months in provincial jail) or a more serious indictment (fingerprints, up to 2 years federal jail).  The police can take fingerprints when they have reasonable and probable cause to believe they’ll proceed with an indictment.  Without this belief, they are unreasonably searching Monteith and seizing his prints, violating his Charter rights.  Monteith was acquitted.  The AG was ordered to pay his costs of $750 and. buddy from the office was sent down to fix the fence on the taxpayer’s dime.

The Court also observes that the decision to appeal this case was not “likely an attempt by the Attorney General to end Halloween traditions, although that is what it must look like to some.”

I’ll close with excerpts from a case that deals with an arrest at a Hallowe’en house party in Canyon Meadows, a Calgary neighbourhood, in 2014 (R. v. Sinclair, 2016 ABPC 75). The decision recounts the testimony and very differing recollections of 7 witnesses.  The cast features at least 3 sets of brothers, a rap band, alcohol, drugs, and arguments over turf.

Sean Sinclair was accused of assaulting Al Fysal Idriess, who was a relative of the homeowner. Sean, a member of the band playing at the house that night, claimed self-defence because he himself felt attacked.

The estimates (let’s call them “rough”) were that 50-100 people were at the house that night. Celebrants included witness Sedina, who “wore cat ears to the party.” Sedina took some folks to the liquor store, because “they were too sober for the party.” A lot of people also remembered “Steve”, also described as “a guy named Steve,” “a fellow named Steve,” “a friend named Steve” and “another guy named Steve.” I think there was only one Steve. No one bothered to get his last name.

There was a controversy in the driveway that involved Al and Sean, and arguments got heated over who was, in fact, the boss of whom:  Guy yelling at other guy:  “Who the fuck are you?” “This is our house.” (Other guy moves from driveway to neighbour’s yard) “This is government property. This isn’t your property. You can’t tell us what to do. You don’t own this.”

Jaden Crozier, Sean’s friend, took part in the taunting. Described as a “tall guy with the toque,” he was at the party “to support the band that was playing, and do some drinking.”

Jaden, although agreeing his memory was “a bit fuzzy,” recalled that out on the lawn, people were arguing and he “may have heard someone say ‘Your music sucks,’ but he wasn’t sure….”  I guess if you’re a guy there to “support the band,” you’re likely to have remember the music critiques.

Jaden did agree that given the passage of time (and perhaps the 6-12 beer), his memory was “a bit fuzzy.”  He also agreed that he got “a bit lippy.”

Jaden spat at Al, and Al dumped a beer on his head. Jaden remembered “the beer dampened his toque, ran down his shirt, and onto his shoes.”

Sean wanted to avenge the honour of his dripping, wet-toqued friend, and declared, “Let’s fucking go. Let’s fight.” According to another witness, Sean had “rage in his eyes” and was “ready to rumble.”

Sean’s evidence, by contrast, was that he was the calm voice in a world of turmoil, and he was not ready to rumble, but tried to walk away. Before he knew it, “He heard footsteps behind him. He was being pursued by a man with a Batman suit wearing glasses.” 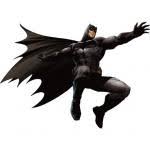 The next thing that happened was he swung his left arm backwards to attempt to stop being attacked from behind. He made contact with someone, but at the time, he didn’t know who. He saw a person behind him out of the corner of his eye, and it was the person wearing the Batman suit. At the time, he was afraid, and attempting to prevent being hit… As he turned towards him, Batman was directly in front of him. He struck him again. He thought he made contact with Batman’s face, but he wasn’t sure. After making contact, Batman fell to one knee, and tried to grab him by the waist. He pried himself away. At this point, [Sean’s] brother, Matthew came up to him and said they should leave.

Another witness saw Sean “grappling with Batman.” Batman, it turns out, was Al’s brother, Waleed, who had come to Al’s defence. While Sean remembered battling Batman and denied hitting Al, the Court convicted Sean of assaulting Al, hitting him with a bottle,  and breaking several of his facial bones.

When it came to sentencing, the Court did say that by attacking Al with a weapon, Sean over-reacted to his friend having beer dumped on his head.  However, in favour of a reduced sentence, Sean was remorseful, tri-lingual, played “guitar, drums, trumpet” and had an “exemplary family upbringing.” He mentored children in sports and was entering a B.Mgmt program at (yes) the University of Lethbridge.  He got a conditional discharge.

The scuffle with Batman did not seem to weigh into sentencing, and predictably, Batman himself was not charged with assault.